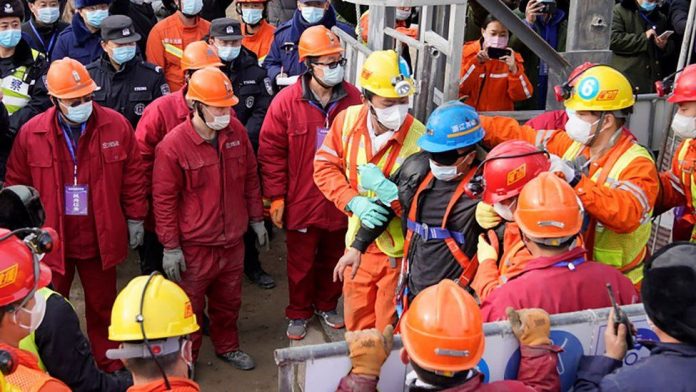 Nine Chinese miners have been found dead a day after 11 of their colleagues were rescued after two weeks trapped in a gold mine in Shandong province.

The mayor of Yantai city was quoted by state broadcaster CCTV as confirming the deaths. One miner remains unaccounted for.

The miners became trapped in the Hushan mine when the entrance to the tunnel collapsed after a blast on 10 January.

There was joy on Sunday after the 11 were brought to the surface.

“From Sunday afternoon to this afternoon, rescue workers have not stopped searching, and found a further nine trapped miners who unfortunately all died,” Yantai Mayor Chen Fei told a briefing on Monday.

“Along with one miner who died on Thursday, the bodies of the nine deceased miners were all lifted out of the mine.”

Rescue efforts had been expected to take weeks, but took a “big step forwards” on Sunday morning when “a huge obstacle blocking the well suddenly fell to the bottom of the shaft,” lead rescue worker Du Bingjian told the state-run Global Times.

The first man to be rescued had been trapped in a different part of the gold mine to the main group of 10.

TV footage showed him being lifted out as emergency workers cheered. He was blindfolded to protect his eyes from the light and was immediately taken to hospital for treatment, with his condition described as “extremely weak.”

About an hour after his rescue, 10 more miners were brought out from a different section of the mine. CCTV said one of them was injured.

Several others were seen walking by themselves, supported by rescue workers, before being transported to hospital.

The nine dead miners were believed to have been in the “Sixth Central Section” of the mine, but details of how they were located are not yet known.