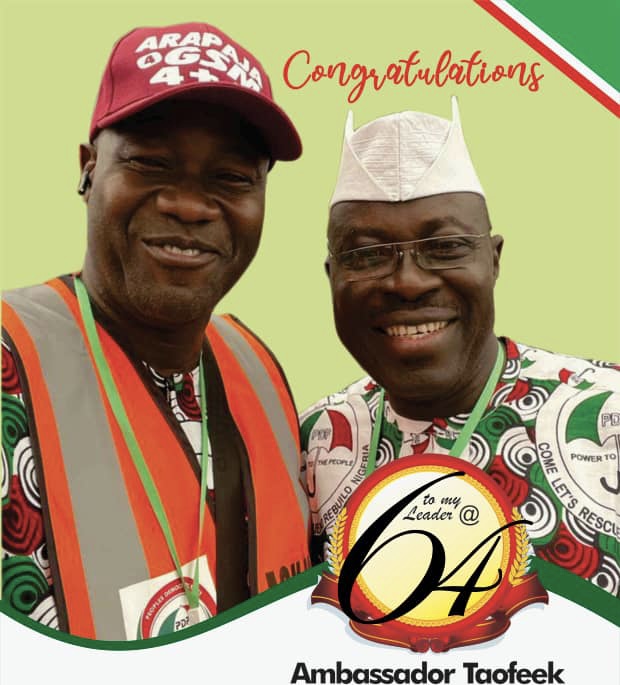 The Special Adviser to Oyo State Governor on Culture and Tourism, Hon. Akeem Ademola Ige has described the Deputy National Chairman (South) of the People’s Democratic Party (PDP), Ambassador Taofeek Arapaja as a Leader whose contribution in politics has resulted in great and tremendous impact in Nigeria.

Hon. Ademola Ige stated this in a birthday congratulatory message he personally issued and made available to Rulers’ World earlier this morning.

Hon. Ige who is the Baameto Aare Ona Kakanfo of Yorubaland stressed that on a day like this, he cannot but celebrate his wonderful boss as he clocks 64 years, adding that to him, Amb. Arapaja deserved to be celebrated because he has set the pace for many good things to emulate.

Hon. Ige equally used the opportunity to commend Amb. Arapaja for his dexterity in resolving the internal wrangling within the PDP in Ibadan South East Local Government at a stakeholders meeting he convened at his Felele residence recently which has laid to rest all the imbroglio that would affect the party and its candidates in the said local government with all the warring parties embracing each other and resolved to work together for party’s victory at the 2023 poll.

He called on the National Working Committee of the party to take a cue from the leadership style and Amb. Arapaja’s experience in finding solution to the crisis that has polarised the party at the National level in order to have a formidable team that will rescue the country from the APC misrule in 2023.

He prayed God continue to bless Amb. Arapaja with all the good things as he journey further in life.