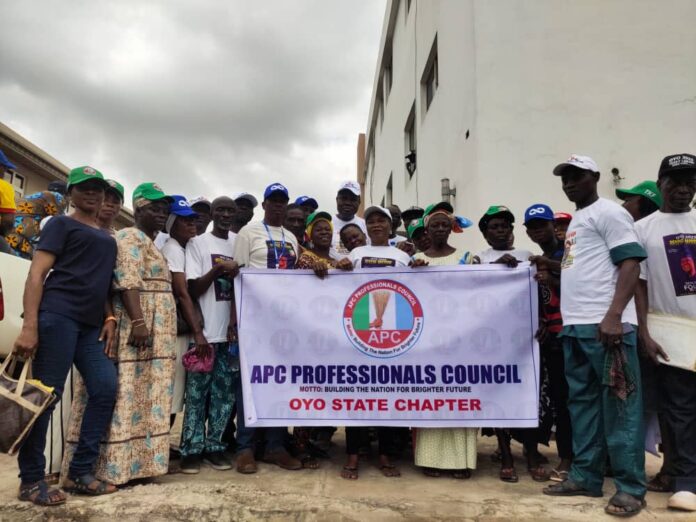 The Oyo State chapter of APC Professionals Council, has praised the leadership of the All Progressives Congress (APC) in the State for peacefully organising a solidarity rally which took place in some parts of Ibadan metropolis in honour of the party’s presidential flagbearer, Asiwaju Bola Ahmed Tinubu and his running mate, Senator Kashim Shetima yesterday.

In a statement issued and signed by the Oyo State Coordinator of the foremost support group Dr Bamidele Gold and made available to journalists, the group expressed delight about the impressive turnout of party members and supporters who trooped out enmasse to demonstrate their support and readiness to ensure victory for the party’s presidential candidate and others during the forthcoming general elections in the State.

Dr Gold who led other members of the Professionals Council’s support group to participate in the solidarity rally, hinted that yesterday’s turnout was a clear affirmation of the acceptance level of the unique leadership style of the party’s presidential flagbearer, Senator Tinubu and his running mate.

The group further commended the gubernatorial candidate in the State, Senator Teslim Folarin who also doubled as the state Coordinator of Asiwaju campaign committee, describing him as an experienced politician who is poised to change the narrative in the governance of Oyo State if elected as the next Governor of the State come 2023.

The group also commended other party leaders and stakeholders that participated in the rally, saying that there participation have shown that the APC is the party to beat come 2023.

According to the group: “These distinguished leaders are tested mobilizers who have all it takes to expand the coast of the party at the grassroots level. We hereby call on lovers of good governance in Oyo State to continue to rally support for the APC, the party that is poised to deliver necessary democratic dividends to the people at the National and state levels.

It is however, disheartening that some hoodlums sponsored by the leaders of the Park Management System led by Alhaji Mukaila Lamidi unleashed terror on the innocent members and supporters who conducted themselves in an orderly manner from the beginning of the procession at Oke Ado.

This act of hooliganism is uncalled for and it is a bad signal for the people in the State.

We are by this statement called on the Oyo State Governor, Engr. Seyi Makinde to call Mukaila Lamidi and his gangs to order by stopping further attack on members of the opposition parties in the State.” The statement concluded.