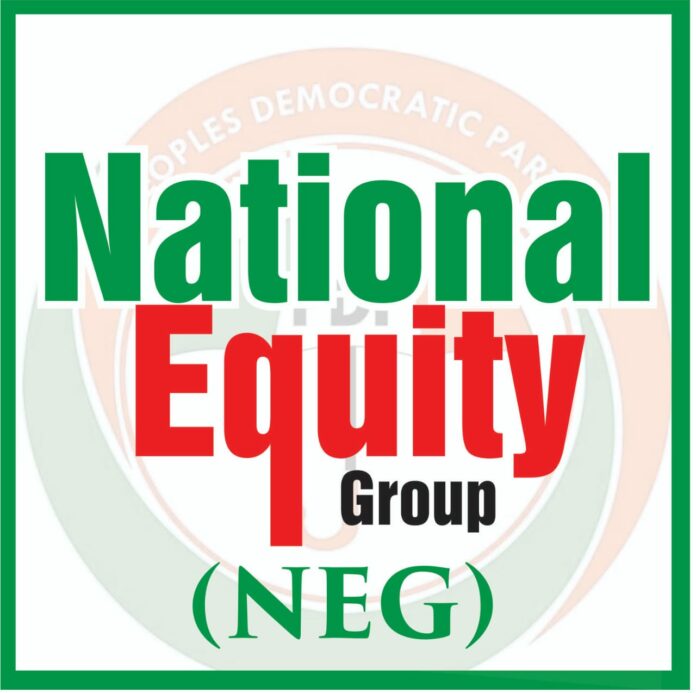 A group within the People’s Democratic Party, National Equity Group (NEG) has berated the National Chairman of the party, Senator Iyorchia Ayu over the divisive statements he issued concerning the presentation of flag to the party’s gubernatorial candidate in Rivers state last weekend.

In a release issued by the Secretary General of the group while reacting to the said statement, Mr Fredrick Samson; the group noted that Ayu committed three fallacies in his statements.

“First, Ayu said: “I did not send anyone to represent me in Rivers state to give any candidate the PDP gubernatorial flag as custom and tradition of the party demands.

May be Ayu has forgotten, or he does not realise that the Deputy National Chairman of the Party, in whose zone the ceremony took place, was present at the event and does not need the approval of anyone before he can perform any role that he has the power and capacity to perform in any states that falls within his Zone.

While Ayu may have his reasons for conspicuosly being absent at the event, it is not seditious for the highest ranking National Working Committee official from the Zone, who was present at the event to do the needful; since the NWC is not a one man show as Ayu thought.”

Secondly, Ayu stated: “The party must present a credible candidate in all standards, that has all requirements in accordance with the rule of law.” Probably, Ayu needs to be reminded that the party has concluded the gubernatorial primary in Rivers state since 25th May, 2022; and a candidate has not only emerged but has also been given the Certificate of Returns by the party under Ayu’s signature and INEC.

The credibility of the Rivers state guber candidate has been determined and laid to rest under the constitution and the Electoral Act.

The most baffling of Ayu’s fallacies read: “When the time comes, the whole world will know who is the real candidate in Rivers state. We wonder if Ayu wants to manufacture another candidate for PDP in Rivers state which is different from Chief Siminalaye Fubara that emerged during the guber primary held on 25th April, 2022; and who has been authenticated by the Independent National Electoral Commission.

The unwritten custom and tradition of the party must bow before the constitution and the Electoral Act.” The statement concluded.