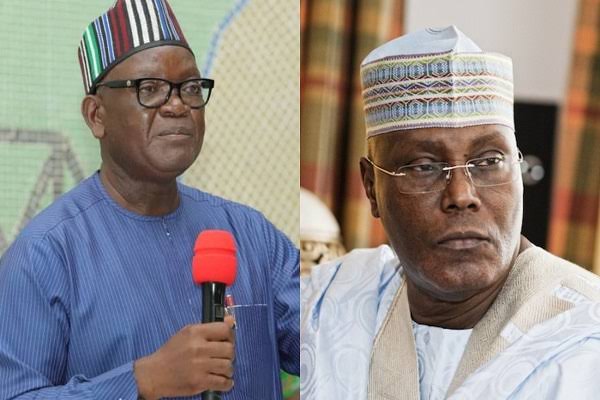 Benue Governor Samuel Ortom has declared that it would be difficult for stakeholders to work for the People’s Democratic Party (PDP) presidential candidate Atiku Abubakar in the state.

Atiku, he said, has neither spoken against killings by herdsmen in the state nor shown any support for the victims.

He said it would be impossible for Benue voters to back such a candidate or for PDP chieftains to market him in the state.

Ortom spoke on Wednesday while addressing Jemgbah Youths Group under the aegis of Jemgbah Youth Support Group (JYSG), who came to endorse him for the senate 2023.

He said: ” I condemned what Atiku said. He is seeking to be President of Nigeria and not Fulani alone. So, he must not seek to please Fulani alone, he must work with everyone.

“From the body language of Alhaji Atiku in Kaduna, he is telling us now that he will come and continue with the killings, carnage and displacement of Benue people as his Fulani tribe is doing. So, we cannot work for that kind of candidate.

“We have been ravaged by flood, do you see Atiku visit anyone? The IDPs of 2017. Atiku came here and I suggested to him to visit the camp but he refused. All I did was provide a law to protect my people and have no issue with Fulani as a man.”

Ortom commended President Muhammadu Buhari for condemning the killings in Gbeji and asked Atiku to borrow a leave from the President, saying that’s how a leader should speak despite political differences.

He also demanded a public apology from Atiku for allegedly lying against him.

He said at no time did he profile Fulani as killers, saying the killer-herdsmen came from neighbouring countries to wreak havoc in Benue.

The governor said: “I draw the attention of Atiku via a WhatsApp chat over the comment in which he profiled me and Atiku apologised.

“I told him (Atiku) to apologise to do it in public because he made the statement against me in public and what he said was unacceptable to me but he refused.

He continued: ” I want to put it on record that at no time I told Atiku that some of my people are stealing my cows. He lied against me and it is unbecoming of a presidential candidate to be telling lies.”

He added: ” I have not profiled Fulani as bad because it would be an illogical fallacy to say all Fulani are bad as I’m working with some Fulani while others are my friends, I have not sent any Fulani away from Benue State.

“But there are Fulani coming from Chad, Niger, and Cameroon to occupy our land, it’s unacceptable and I cannot keep quiet”.

He asked Atiku to apologise to the Tiv people because he has committed sacrilege against them.