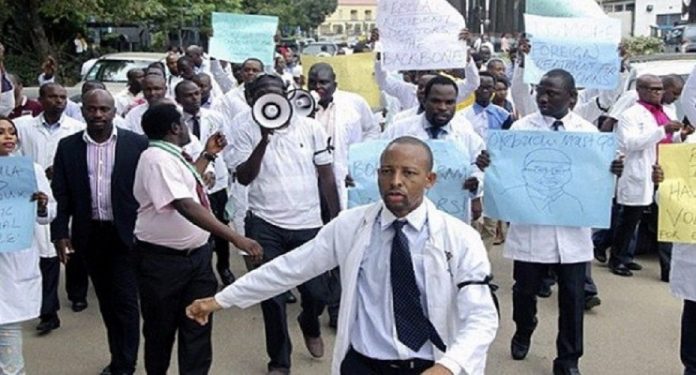 Members of the Nigerian Association of Resident Doctors (NARD) have commenced an industrial action across the country.

The NARD strike which was scheduled to begin on Thursday followed an ultimatum issued to the Federal Government which expired on Wednesday.

NARD President, Dr Uyilawa Okhuaihesuyi, announced the commencement of the nationwide strike during an interview on Sunrise Daily – a breakfast programme on Channels Television.

“The strike commenced 8 am this morning, and we enjoin all resident doctors to start the strike immediately,” he said.

Ahead of the planned strike, the Minister of Labour and Employment, Doctor Chris Ngige, a conciliatory meeting with the leaders of the union on Wednesday in Abuja.

At the meeting which lasted several hours, he appealed to the aggrieved medical practitioners to have a rethink and sheathe their sword, saying the Federal Government was making efforts to ensure their demands were met.

Giving an update on the meeting, Okhuaihesuyi who led other leaders of the union to the discussion said they were not strange to the government’s proposal.

He stressed the need for the government to take more responsibility, adding that the decision to go on strike was for the benefit of all healthcare workers in the country.

“We had a meeting with the Minister of Labour from 4pm till about 12am this morning; we insist that the implementation of what we wrote on the strike notice should be intimated immediately.

“We are not just doing this for resident doctors, we are doing this for all health workers … the government needs to be more responsible,” the NARD president stated.