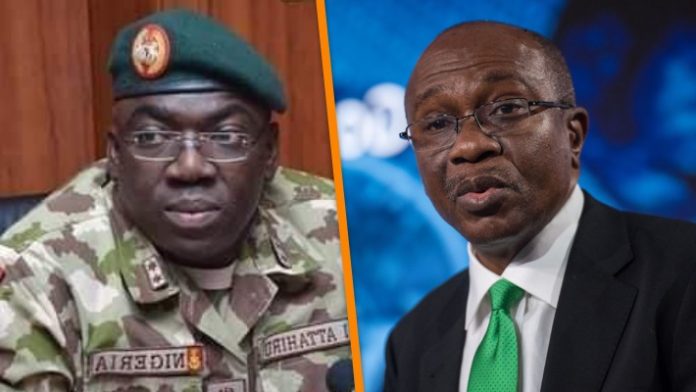 The Chief of Army Staff, Lieutenant General Ibrahim Attahiru, and the Governor of the Central Bank of Nigeria (CBN), Godwin Emefiele, have been summoned to appear before an ad-hoc committee of the House of Representatives next month.

Members of the ad-hoc committee, chaired by Olaide Akinremi, summoned both men on Monday after they failed to honour an earlier invitation extended to them.

The motion for their summon was moved by a lawmaker, Bede Eke, who was furious that the army chief, for a second time, did not appear before the committee despite having rejected his representative on the first day of the hearing which held on March 12.

The lawmakers are among the committee that is reviewing the purchase, use, and control of arms, ammunition, and related hardware by the military, paramilitary, and other law enforcement agencies in the country.

They had invited Attahiru and Emefiele to appear before them on Monday to answer questions relating to the purchase of arms for the security agencies.

The army chief and CBN governor, however, failed to appear before the committee, an action which was condemned by the lawmakers.

Thereafter, the lawmakers passed a resolution to summon Attahiru and Emefiele to appear before them on April 7, 2021.

Recently, it was alleged that funds meant for the purchase of arms were missing under the leadership of the former service chiefs.

The claim was credited to the National Security Adviser (NSA), Major General Babagana Monguno, during an interview with BBC Hausa Service earlier in March.

While the former service chiefs have since denied the allegation, the office of the NSA also said Monguno was quoted out of context and did not categorically make such a claim.