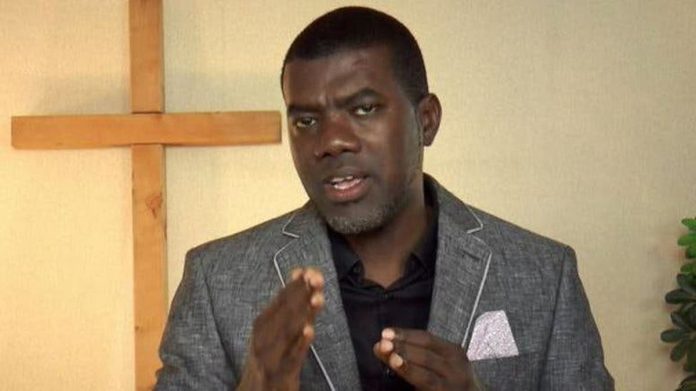 Reno Omokri says he will be staging a #HarassBuhariOutofLondon protest at the Abuja House in the United Kingdom on Friday, April 2. President Buhari is currently in the UK for a routine medical checkup.

In a video posted online this afternoon, Reno said the President cannot be allowed to go to the UK to seek better health care when he hasn’t accounted for what happened to Nigerian youths at the Lekki tollgate in October 2020 during the EndSARS protest.

The former presidential aide said he will be flying into London tomorrow and from the airport will be going straight to Abuja house to ”harass the President out of London.” He promised to also pay the transport fare of Nigerians residing in the UK who are willing to join him.

Recall, that Reno Omokri, has previously urged all Nigerians to join the #FreeRCCGMembers campaign, calling for the release of abducted Members and pastors of the Redeemed Christian Church of God(RCCG) who were kidnapped in Kaduna state on Friday the 26th of March, 2021. Five days after the Christians were abducted in the state, they have not been released.

In a video, pastor Omokri who condemned the abduction also lamented that while the media has kept quiet about the abduction, the government has equally failed to launch action for their release.

He therefore, urged everyone to join the campaign to mount pressure on the government to secure the release of the Christians. He said thus: “On Friday, March 26, 2021, eight members of the Redeemed Christian Church of God(RCCG) and their pastors were abducted in Kaduna. Five days later, today is Wednesday 31st of March, 2021, they’ve not been released.

ALSO READ: Kaduna: 100 in bandits’ dens, others live in fear ―CAN

The media has moved on, the government has forgotten about them and it is up to you and I to do something. We have got credible intelligence that we need to act now. And just imagine if it was you or members of your family, you would want the rest of us to do something, we can’t just abandone you.

And just imagine if you were Muslim or Christian, no religion supports this. Christ said in Mathew 25:40 that “whatsoever you do for the least of my brothers, you do unto me.” So, I’m calling you to do something for Christ. 6pm today, go on your social media platform, Facebook, ticktock, snapchat, Instagram, Twitter, whatever it is, and put this hashtag #FreeRCCGmembers. Let’s get this on the front bummer again.

We can’t let this be a cold case because we will put pressure on the government to act. We do not want this to end sadly. My name is Reno Omokri and I urge you, join me 6pm today, don’t say “oh I’m doing something quietly. Scripture condemns hidden love in Proverbs 27:5. Let’s come out publicly and make sure that we put pressure on the government to get these people freed.”