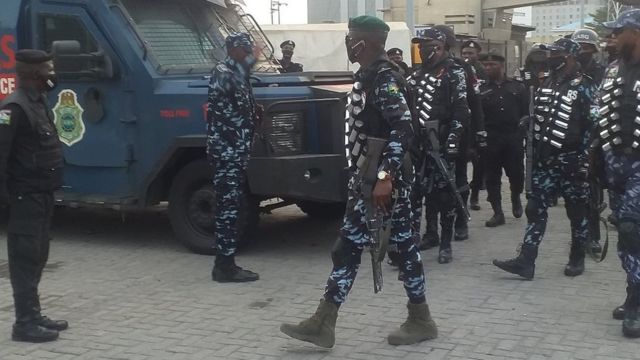 Police on Saturday arrested protesters at the Lekki Toll Gate as calls for the reopening of the facility to be suspended gain momentum.

The police had earlier on Friday launched a show-of-force exercise to express its disapproval of the planned protest.

On Saturday morning, the police picked up anyone they suspected to be at the toll gate for protest.

They also prevented journalists from moving close to the van where the protesters were being held.

The Lagos State Judicial Panel of Inquiry on February 6 had ordered that the toll gate be handed over back to the Lekki Concession Company for reopening.

But the panel’s decision was not unanimous as some members disagreed with the reopening since investigations into the events of October 20 were still ongoing.

The toll had been closed since October, during the #EndSARS protests, which called for an end to police brutality across the country.

On October 20, the Nigerian military shot at peaceful protesters occupying the toll, an event that was described as a massacre by some eyewitnesses.

The Nigerian government and military have denied any wrongdoing.

There should be “a full & thorough investigation into the Lekki Toll Gate incidence; ensure justice for all victims; & that any & every one found culpable is identified & recommended for appropriate action under the law,” the youth representatives on the Lagos panel said in a February 6 statement, outlining their dissent.