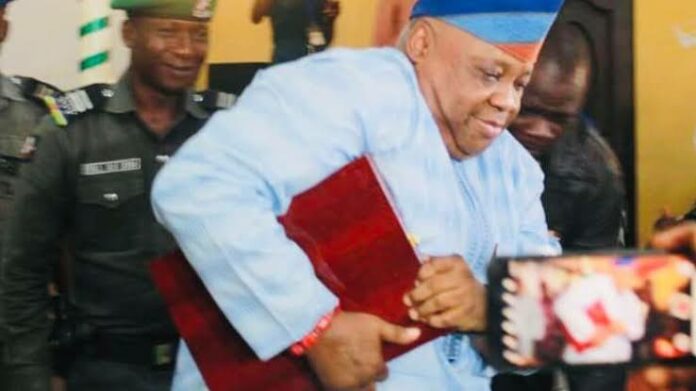 The Osun State Election Petition Tribunal on Saturday admitted in evidence the file with the Independent National Electoral Commission (INEC) containing the secondary school certificate and testimonial of Governor Ademola Adeleke of the state.

This is just as the petitioners, Mr Adegboyega Oyetola and the All Progressives Congress (APC), closed their case, leaving respondents to state their defence.

The admission of the documents followed the appearance of INEC representative, Mrs Joan Arabs, who brought Adeleke’s original files containing the certificate he submitted to the Commission in 2018.

It will be recalled that during the last sitting of the panel, the Commission had submitted a blank document as the secondary school certificate of the governor, a situation that compelled the panel to order that the original file be brought and to threaten to invoke Coercive Power if it fails to do so.

At the resumed hearing of the petition on Saturday, counsel for Oyetola, Chief Lateef Fagbemi (SAN), said the hearing for the day was basically meant for the appearance of INEC representative to produce Adeleke’s file in line with the court order.

Counsel for INEC, in his response, said that INEC representative was already in court with the files containing a clearer and legible certificate and testimonial in question, saying he would be willing to apply for the return of the documents to INEC when the Tribunal is done looking at it.

After the production of the documents, the Tribunal, while discharging the INEC official, said, “You can now go if you wish to. No policeman will accost you again.”

Subsequently, Oyetola’s counsel sought to tender the documents which contain Form CFO01 and its attachments, including Adeleke’s credentials, saying the original file brought to court is a piece of primary evidence and he was comfortable with it.

Counsel for INEC, Chief Henry Agunedo (SAN), said he would be objecting to the admissibility of the documents on the ground that the basis for the production of the entire file was because only two pages of the earlier-produced Certified True Copies were in contention, saying tendering the entire documents was out of place.

Counsel for Adeleke and PDP, Niyi Owolade and Alex Izinyon (SAN) respectively, said they have objections to the tendering of the said documents, but they would reserve their objections till the final address stage.

Izinyon also observed that the only documents in contention were only two pages which are Adeleke’s certificate and testimonial, saying the CTC earlier produced had not been tendered before the court.

Responding, Fagbemi said the practice everywhere is that INEC can only apply and get back the files after the dispensation of the cases, saying, “We asked for CTC and now that they brought this. We are fine, we will take it”.

Ruling on the documents tendered, the Tribunal, led by Tertsea Kume, admitted the credentials and Adeleke’s nomination form as exhibit ‘FILE D’ and taken as read.

It was after the Tribunal admitted the documents that Fagbemi informed the panel that he had decided to close his case, saying, “My Lord, we rest our case”.

When the Tribunal asked INEC to open his defence, Chief Agunedo said it would be difficult for him to open his case on Monday, saying the non-availability of his witnesses would make it practically impossible.

The panel then asked the counsel to meet and agree on an adjournment date after which counsel for INEC briefed the panel on the outcome of the meeting.

Subsequently, the Tribunal adjourned the case till I 20 December lol for the respondents to open their defence, saying the adjournment was based on another engagement by the Tribunal somewhere else between 12th and 19th December 2022.

Earlier, Oyetola’s counsel had informed the panel that the Court of Appeal in Abuja had overturned the judgement of a Federal High Court which disqualified Oyetola from contesting the election.

Meanwhile, the outcome of the sitting excited the members of the APC who witnessed the hearing, as jubilations erupted after the sitting of the panel. They chanted songs to eulogise Oyetola and the APC.