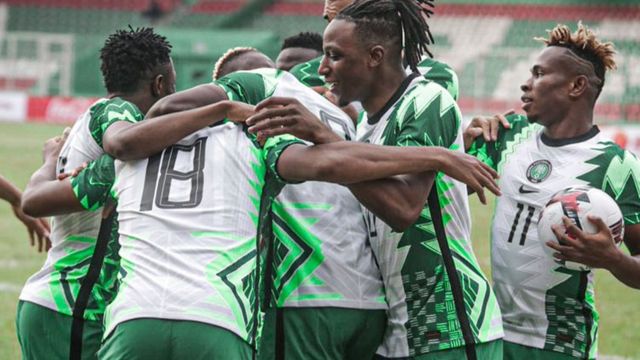 The result at the Stade Charles de Gaulle, while confirming Nigeria’s top spot finish, however delayed the Squirrels’ qualification to next year’s Africa Cup of Nations (AFCON).

Nigeria had already earned qualification even before they stepped on the pitch in Porto Novo after Sierra-Leone and Lesotho had played a barren draw.

Benin looked set to follow the Super Eagles to Cameroon as they had held on to a draw in the first half.

But the last-minute goal means they are now faced with an important last match away to Sierra-Leone, who also have qualification hopes.

Sierra-Leone are on four points and could qualify with a win at home against Benin, who need just a point to go through.

Nigeria play Lesotho in the last group match, the latter’s hopes having been ended after their draw with Sierra-Leone.

In Porto Novo, it was a game of two halfs.

Nigeria dominated the opening half while Benin’s Squirrels had more chances in the second period, though none of the efforts could bear a goal.

The Super Eagles, perhaps charged with the pre-match news that they were already qualified for Cameroon even before they took to the pitch against Benin, started the match strongly.

They then ended the half with the most goalscoring chances.

As early as the fifth minute, the Nigerians were already causing their hosts jitters.

That was when Victor Osimhen struck a shot wide across the face of goal when he was sent through by Henry Onyekuru.

Two minutes later, Benin goalkeeper Saturnin Allagbe made a brilliant one-handed save to tip over a snap shot from Kelechi Iheanacho.

Benin had their first effort at goal in the 21st minute, but it was a faint one, and the closest they came with threatening the Nigerian backline.

Steve Mounie turned quickly from 30 yards out before unleashing a shot from his right boot, but the effort spread wide.

The Nigerians continued dominating and Osimhen once again had a chance in the 24th minute.

However, the lanky Napoli striker took a hurried shot that was easily saved when a good interchange of passes released him into the box.

Gernot Rohr’s men were playing some good football and some neat team play in the 33rd minute almost opened up the opening goal.

That was when Ola Aina switched flanks to float the ball to Onyekuru on the left.

The winger teed up Iheanacho but his shot deflected for a corner-kick.

A minute to the break, Allagbe made a super block at point-blank to deny Onyekuru who snapped in a quick header from a decent Zaidu Sanusi cross from the left.

In the second half, Benin started stronger and had a chance presented to them in the 51st minute.

Confusion between William Troost-Ekong and goalkeeper Maduka Okoye saw Mounie sneak in between the two, but his attempted lob over Okoye was wide.

The striker’s first effort from the edge of the area went over while in the 56th minute, he had a low shot from the right hit the upright.

At the other end, Okoye made a good save in the 63rd minute.

This was when he went down to his left to pluck out a header from Mounie who had risen to connect to a Youssouf Amouda cross.

The final 25 minutes of the game were a see-saw affair between the two sides.

It was Nigeria who would come alive in the final minutes.

Their late pressure bore fruit when Onuachu headed home after Allagbe had saved Osimhen’s effort with his feet.