Yahaya assumed duty as Nigeria’s 22nd Chief of Army Staff at a ceremony held at the Army Headquarters in Abuja on Friday. 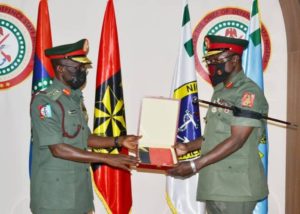 He was appointed by President Muhammadu Buhari on Thursday following the death of late Army Chief, Lt.-Gen Ibrahim Attahiru, who died in an ill-fated Nigerian Air Force plane at the Kaduna International Airport last Friday.

It was gathered that the newly-appointed Chief Of Army Staff, on arrival, inspected the guard of honour at the sentry from where he proceeded to the conference room.

Yahaya further led others to observe a minute silence in honour of his late predecessor and 10 other military officers who died in the plane crash.