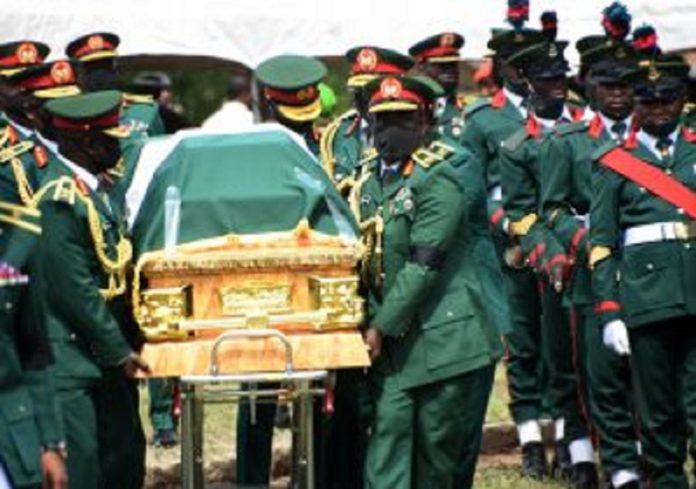 The remains of Chief of Army Staff (COAS), Lt- Gen. Ibrahim Attahiru, and 10 other officers, who died in the ill-fated crashed NAF aircraft in Kaduna Friday, were buried amid tears, in Abuja Saturday.

Family members, friends, colleagues, and sympathisers of the deceased wept uncontrollably as their remains were laid to rest at the National Military Cemetery Abuja.

The interment followed funeral services at the National Mosque and Nigerian Air Force Protestant Church after the bodies were received at the Nnamdi Azikiwe International Airport.

President Muhammadu Buhari, who was represented by the Minister of Defence, retired Maj.-Gen. Bashir Magashi, at the funeral, eulogised the late Attahiru and other officers, who died with him

Buhari said that the late army chief was a dedicated and committed officer, who died when his services were most needed.

He said that late Attahiru had demonstrated a high level of commitment as well as inspired courage and confidence in the officers and soldiers of the Nigerian army.

“Today is indeed a trying moment for the Nigerian army and indeed the armed forces of our country, a period that witnessed the death of 11 brave officers and men of the armed forces in an ill-fated plane crash in Kaduna.

“These were absolute gentlemen and were one of the most disciplined officers and men who sacrificed their lives in the service of the nation and they will never be forgotten.

“These fine gentlemen had a glorious career in the armed forces in the course of which they served gallantly in several capacities,” he said.

According to him, the late Gen. Attahiru was an icon of professionalism, bravery and discipline and he actually demonstrated these attributes throughout his national and international assignments.

“The late chief of army staff inspired courage and confidence in Nigerian army which informed the successes recorded during his watch.

“He led the Nigerian army from the front and was a source of inspiration worthy of emulation by all officers and men of the armed forces of Nigeria,” he said.

Buhari promised to ensure that the contribution of the deceased officer to the unity, peace, and security of Nigeria would be remembered.

He also said the late three brigadier generals were some of the finest gentlemen in the armed forces in recent times.

He said that the late majors and crew members were also promising young officers that were dedicated and committed to the service of their fatherland.

He, however, condoled with the families of the fallen officers and assured them of the Federal Government support through the trying time.

The Chief of Defence Staff, Gen. Lucky Irabor, who titled his remarks, “Love for Country” said that the demise of the late army chief was a monumental loss to the armed forces and Nigeria in general.

Irabor, who recounted their thoughts on how to move the armed forces forward, said they were together training and Doctrine Command when their appointments were announced.

He disclosed that the Attahiru was on his way to the Depot, Nigerian Army, Zaria for the passing out parade of regular recruits slated for today before the sad incident happened.

“He had a distinguished career and a privilege of commanding with distinction along with the tactical, operational, and strategic levels of military engagements in the Nigerian army.

“These positions afforded him the unique opportunity to express his determination, energy, resourcefulness, professional endowment, and strength of character.

“More significantly, he showed his patriotism and loyalty to the unity, security, stability, and well-being of the nation.

“He was truly a fine officer and a gentleman, he has left us at a time when he is most needed, a time that is gone forever,” he said.

At the mosque, Chief Imam, Dr Ahmad Onilewura, urged everyone to be mindful of death, adding that “it is only God that knows when and how anyone would die”.

He prayed for the souls of the departed to find peace in eternity.

In attendance at the funeral were the Sultan of Sokoto, Alhaji Sa’ad Abubakar III, President of the Senate, Ahmed Lawan, governors of Borno, Kaduna, Kebbi, and Yobe as well as other service chiefs.

Also, the Chief of Staff to the President, Prof. Ibrahim Gambari, and the Secretary to the Government of the Federation (SGF), Mr Boss Mustapha, among others attended the event.