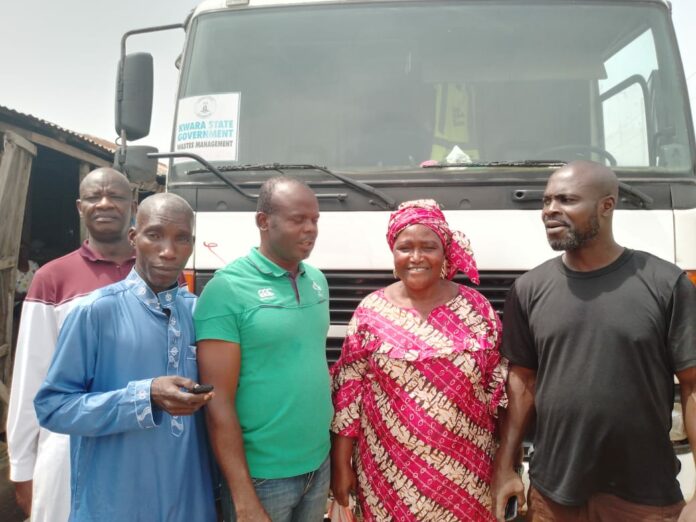 Residents of Sabo-Oke, Ilupeju community in the Ilorin East local government area of Kwara state have complained over health hazard and traffic danger being posed by a government refuse disposal truck allegedly abandoned in the community.

Speaking on behalf of the chairman of the community association, Elder Joseph Afolabi, the public relations officer of the community, Pastor Taiwo Ajibola, decried attitude of the state government, saying they had refused to remove the vehicle despite repeated call made by the community.

The people also said that some members of the public had started dumping refuse inside the abandoned refuse disposal truck, said to have been left on the roadside for more than two weeks.

They said that the vehicle constitute health hazard to members of the community as there are food sellers near the vehicle.

Pastor Ajibola, who sent a save our soul (SOS) message to the authorities concerned, said that the abandoned refuse disposal truck had caused road accidents where parked because pedestrians and motorists could not see clear view of the road.

“We discover that the Kwara State Ministry of Environment’s waste management board vehicle broke down here almost two weeks now. We don’t know the technical problems but the people affected said they had been here to fix it more than two times without success.

“We have intensified all efforts to reach out to them. We have been to the director, we suggested to them that they should come and help us tow it out of this place. Also, some people in the community have been to the Ministry of Environment to go and see the commissioner. They said they would come and tow it and this is almost 10 days now. We want the government of Kwara state to help us look into this matter. We want the government of Kwara State to come and save our souls here.

“This has polluted the air around here. More so, there are food canteens located where the refuse disposal truck had broken down and it has also caused traffic accident twice. The fear is that it can lead to unrest in the community. It can be used by evil minded people to perpetrate their evil deeds. The government should please look into the matter and come to our aid”

Also speaking, the Youth Leader in the community, Mr. Femi Thomas, solicited help of the state government, saying that, “There was an accident that happened three days ago due to inability of motorists to see the other side of the road. The abandoned truck is also close to a school. They should please help us to remove the waste disposal truck from the community.

The Chairman, Environmental Committee of Sabo-Oke Community, Mr. Mutiu Tijani, also pleaded with the state government to help tow the refuse disposal truck out of the community.