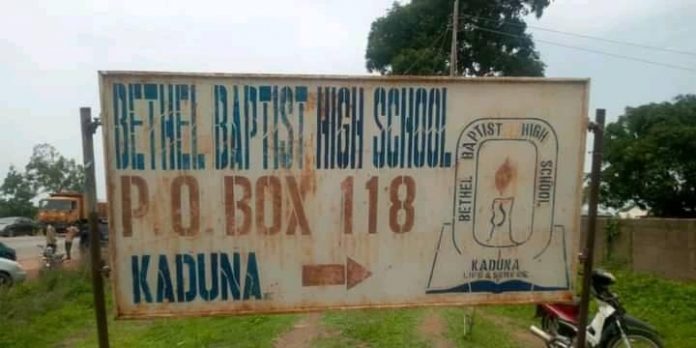 Kidnapped students of Bethel Baptist High School, Damishi, Kaduna have been released by the bandits who abducted them.

The students who were kidnapped from their hostels by bandits on July 5, regained freedom after 20 days in captivity.

According to ChannelsTV, The students were found inside the Tsoho Gaya Forest in Chikun Local Government Area of the state in the early hours of Sunday.

It is not clear whether the bandits released them for ransom or they were rescued by security operatives or escaped by themselves.

Three of the students were rescued by police operatives some days ago at a location also in Chikun Local Government Area and were later taken to a police medical facility for medical checks.

121 students of Bethel Baptist secondary school in Chikun local government area of Kaduna state were abducted from their hotels by bandits on July 8.

The bandits later demanded a ransom of ₦60 ransom for the release of the students.

Armed kidnappings for ransom along highways, and from homes and businesses now make almost daily newspaper headlines in Africa’s most populous country.

But mass school abductions have soared this year, with almost 1,000 students kidnapped, according to UNICEF. Most are released after negotiations but many are still being held in forest hideouts like the Bethel pupils.

The list of missing from Bethel makes heartbreaking reading: 121 names, the oldest 19, the youngest just 10. Most are under 15.

“I am a mother and I would not like anybody to take my child away from me for one day. Imagine the trauma,” Hassana Ayuba, whose daughter Judith was taken, told AFP.

The attack has devastated the tightly-knit, religiously faithful community. At the school, parents hold daily hours-long prayers and vigils and call for President Muhammadu Buhari to help free the children.