The All Progressives Congress (APC) has announced that the party’s congresses will start across the country from July 31.

This is contained in a letter dated July 11, 2021, and signed by the APC National Chairman, Governor Mai Mala Buni; and National Secretary, John Akpanuoedehe, and addressed to the chairman of the Independent National Electoral Commission (INEC). 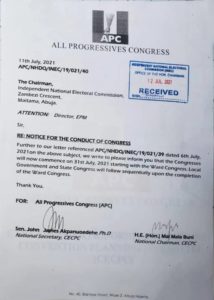 A copy of the letter with reference number APC/NHDQ/INEC/19/021/40 made available to newsmen showed that the party will start with the ward congresses on July 31.

It will subsequently be followed by the local government and state congresses after the conclusion of the ward congresses.

The party had earlier postponed the congresses indefinitely.