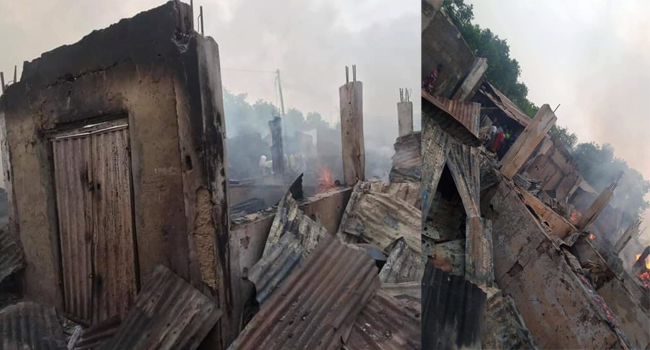 Properties worth millions of Naira and over 60 shops have been recorded destroyed following a Saturday midnight fire outbreak at the TudunWada Market, in Gusau, Zamfara State capital.

The Chairman of the market, Lawali Bello told Channels Television that the inferno was caused by an electrical fault in one of the shops and it eventually spread to other shops, destroying over 60 shops.

Traders who were victims of the inferno on Sunday morning visited the market and counted their losses. They also called on the government to intervene and assuage their situation.

Governor Bello Matawalle also visited the scene of the fire outbreak on Sunday to assess the level of damage.

He promised to assist the victims with some money to immediately restart business somewhere else, pending the reconstruction of the burnt shops.

He directed the immediate reconstruction of the market into modern shops, to enable the affected traders to have a befitting environment to do their businesses.

The Governor sympathised with the victims over the unfortunate development and asked them to see the situation as the will of God.

It could be recalled that about ten months ago, part of the same Tudun Wada market was gutted by fire which resulted in the loss of properties worth millions of naira.