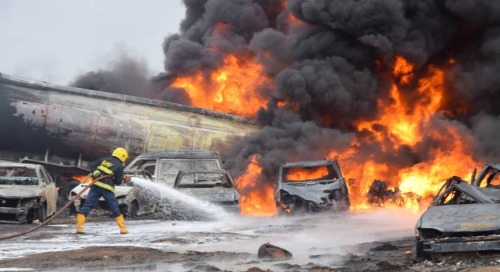 A head-on collision involving an 18-Seater commercial bus and a petrol tanker, on Wednesday, led to an explosion, leaving seven people burnt to death and two people sustaining various degrees of injuries, at Ajilete, near Idiroko border in Ogun State.

It was gathered that excessive speed and wrongful overtaking led to the head-on collision, when the commercial bus coming from Ajilete sloppy road suddenly lost control, bumped into an object, and burst into flames.

An eyewitness account said that the rescue team including operatives of the Ogun State Traffic Compliance and Enforcement Corps, (TRACE) and Police are already on the ground.

The Federal Road Safety Corps (FRSC) confirmed that seven persons died in an explosion after a commercial bus collided with a petrol tanker at Ajilete on Idiroko expressway on Wednesday.

Olaluwoye said that the accident happened at about 8.45 a.m.

The unit commander said that the bus due to speeding, rammed into the tanker, laden with 33,000 litres of petroleum products while it was ascending the sloppy Ajilete road.

He said that nine persons were involved in the accident which claimed seven lives, living two others with various degrees of injuries.