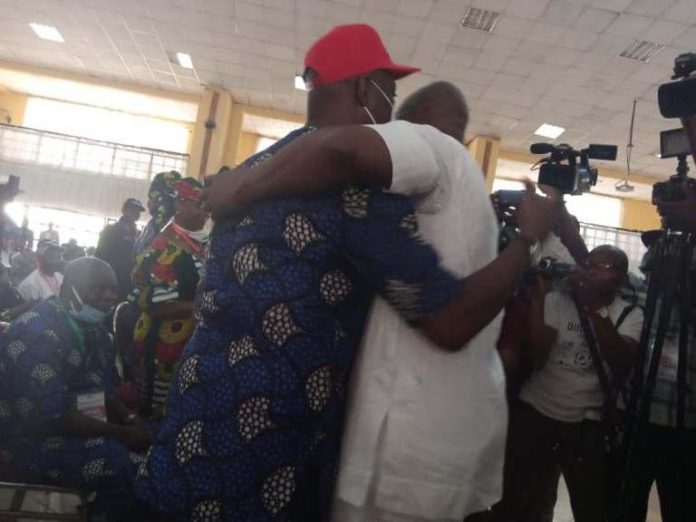 The immediate past governor of Ekiti State, Ayodele Fayose, has conceded the leadership of the l at the Southwest region to the governor of Oyo State, Seyi Makinde.

Fayose, while addressing the party delegates before the commencement of the election of party delegates at the Southwest congress of the PDP, in Osogbo on Monday, said the issues in the build-up to the congress were circumstantial, which has to be addressed.

He said, “The issue at this congress is circumstantial, the question is who is our leader, Gov Seyi Makinde is our leader, therefore, our supporters and lovers should not be putting a wedge between us.

“Distinguish leaders, I want to assure you that we will make exploit together and anywhere it goes, I will accept, In any family Where there is cause to vote, there will be a divide, but I assure you, wherever it goes I will abide.

“Arapaja was a Deputy Governor; and he is not a small man, even if he has abused me so much, that is politics, if you emerge the Chairman, I will be the first person to visit you in Ibadan, because there is nothing that lasts forever.

“No one offends me and if I have offended anybody, I apologise. I and Makinde were one since the beginning, politicking lead to this misunderstanding, but notwithstanding, you are our father.”

However, Governor Seyi Makinde has said there would not be a winner or loser after the congress.

The governor described the election as an attempt to reposition the party in the region.

“This is a family affair. It is an attempt to reposition our party in the Southwest. It has ramifications for our party nationally. Whatever the outcome is, we will take it in the spirit of a family contest. We don’t want to defeat ourselves, we want to defeat the All Progressives Congress (APC).

“At the end of this exercise, there will be no victor, no vanquish. As the only Governor of the party in the zone, whoever emerges, I will work with them to reposition the party. I thank you for the peaceful conduct,” Makinde said.