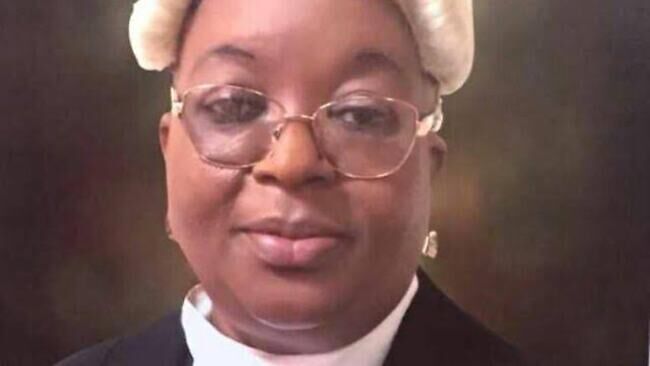 It was a day written with indelible ink in the hearts of leadership of courts from magistrates to Supreme Court Justices as well as silks across the country, gathered to celebrate one of the fearless judges in Lagos State judiciary, Justice Sherifat Solebo, when she took a bow from the bench, after twenty years meritorious service to the justice sector in the Centre of Excellence.

The even was kicked start with tribute session, which was part of events marking her retirement from service at Ikeja, Lagos, led by the State Chief Judge, Justice Kazeem Alogba, followed by the State Attorney-General, Moyosore Onigbanjo, SAN; Senior Advocates of Nigeria, SANs; members of the Nigerian Bar Association, as well as Senior Court Officials and traditional rulers.

Justice Alogba, in his tribute remarks, said on behalf of the state government he was pleased to join his accolade to the many tributes of his colleagues, while acknowledging, Justice Solebo’s many achievements.

The Chief Judge noted that Justice Solebo had dealt with and had ruled on many difficult and complex cases in areas of law, including, criminal law, land disputes, family and child’s care actions, as well as constitutional law.

On his part, the State Attorney-General, Moyosore Onigbanjo, SAN, described the journey of Justice Solebo, as depicting what can be achieved with perseverance, dedication and faith in God.

The SAN emphasised that Justice Solebo being a Muslim has been forthright and fearless in discharging her duties as a Judge, knowing fully well that all her deeds on earth would be accounted for before the Almighty Allah.

Also contributing, the Coordinator, West African Regional Center for Law and Religious Studies, Faculty of Law, University of Lagos, Unilag, Prof Akin Ibidapo-Obe, noted that the Judge unheralded intellectual interventions on various fora such as the Nigerian Bar Association, NBA; the Universities, the Civil Society Organization has made her leadership reputation as an incisive.

Delivering a sermon at the event, an Islamic scholar and legal practitioner, Basheer Shittu enjoined all faithfuls to make gratitude the fulcrum of their supplications to increase their blessings from Allah as well as admittance to Jannat Adnin.

She went into private practice under the tutelage of Kunle Tuyo Esq. before joining the Lagos State Judiciary as a Magistrate in 1999 and rose through the ranks to the position of the Chief Magistrate/Deputy Chief Registrar (Special Duties) before her appointment as a Judge in 2017.

ln 2002, Hon. Justice Sherifat Solebo was appointed into the UNICEF Advocacy Group and was appointed as a Local Land Expert by the World Bank from 2008 to 2009. She was the Coroner for Mushin District between 2012 and 2014 and served as a member of the Local Government Election Petitions Tribunal in 2012.

She had over the years been trained by UNICEF on Children’s Rights and Protection and by other similar organisations like National Conference on Juvenile Justice In Las Vegas, where she is also a member.

She is a member of the Chartered Institute of Mediators and Conciliators, and an active member of the Lagos State Domestic and Sexual Violence Response Agency. She was a member of various committees, such as, (i) the 2019 High Court of Lagos state (Civil Procedure Rules) Review Committee; (ii) the Probate Review Committee; and (iii) the Administration of Criminal Justice Law of Lagos State Review Committee. Additionally, up until 2021, she has contributed to the World Bank’s research on ‘Doing Business in Nigeria’ with a particular focus on the business environment in Lagos State. She worked with Prof. Carolyn Hamilton on the 2019 Family Court (Civil Procedure) Rules.

Hon. Justice Solebo has amassed over 20years experience in presiding over Civil, Criminal, Land and Family disputes in Court.