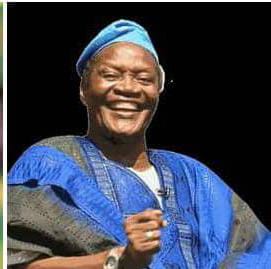 It was a glamorous and beautiful Saturday on 22 October, 2022, as Abeokuta, the capital of Ogun State welcomed to its bowels distinguished and eminent members of the society who came together to celebrate a legend, father, actor, song writer, folklorist and singer, Pa. Jimi Solanke, on his birthday.

The party was held at the June 12 Cultural Center, Kuto, Abeokuta and hosted by the popular veteran actor, Yemi Shodimu.

The hall was filled with prestigious members who wanted to celebrate with the folklorist. As people were being interviewed outside by the popular Queen of red carpet, Fola Slim of Apreel1 Events TV and Ogun State cultural Troup had us entertained while awaiting the celebrant.

The time came for the celebrant to make his grand entrance and by his looks he was shocked to see so many people there. His joy knew no bound as Pa Solanke danced flawlessly to the stage.

One would think it was a youth dancing. He danced to “Wa Beru Re Ni Bode” by Tope Alabi and didn’t stop dancing till they stopped the music. He was just full of life and joy.

Few minutes after his entrance the National Anthem and state Anthem were rendered while opening prayer was said by Maye Olubadan of Ibadanland, Oloye Lekan Alabi.

The party took off and his song, Osupa was rendered to him. Pa Solanke could not stand still as he went on stage, collected the microphone and start to sing along. Everyone had to stand and dance to the song because an Icon was rendering his own song.

Many entertainers came to pay their respect to the Icon and they all sang, danced and interviewed by Apreel1 1 Events TV.

Renowned film maker and director, Tunde Kelani, was also present to celebrate with the Icon.

The governor of Ogun State, Prince Dapo Abiodun, was represented at the event by his deputy, Engr. Noimot Salako, who delivered a speech on his behalf. Governor Abiodun made many complimentary remarks about the celebrant, Pa Solanke.

The host and Ogun State Commissioner for Art, Culture and Tourism, Hon. Adijat Motunrayo Adeleye – Oladapo, could not hide her joy for the success of the event and also said what she knew about the legendary, Pa. Jimi Solanke.

An auction for his life work was made by Yemi Shodimu and Amabasador Wale Ojo-lanre opened the floor. Many people started purchasing his songs and this made the celebrant happy.

Presents were also presented to him while pictures were taken with the Icon.

Jimi solanke born July 4, 1942 is a Nigerian film actor, dramatist, folk singer, poet and playwright. He graduated from the prestigious University of Ibadan where he obtained a diploma certificate in drama. After graduation, he moved to the United States where he created a drama group called “The Africa Review”, focusing on African culture. Members of this group put on African Clothings specifically Yoruba costume. They performed in black African schools. He’s well known for his storytelling in Los Angeles where his career began. He is themed as a “master storyteller “ by CNN.

The wife of the celebrant, Toyin Solanke, in her vote of thanks appreciated everyone that attended her husband’s birthday anniversary celebration.

The event was covered by Apreel1 Events TV.