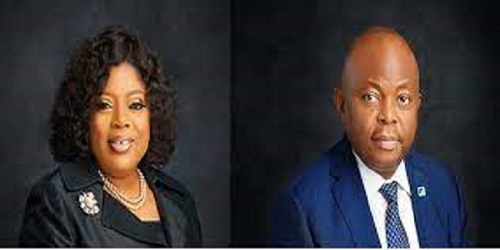 Call it bitter boardroom fratricidal war and you may not be far from reality. For the recently appointed Managing, Director/Chief Executive Officer of Fidelity Bank plc, Ms Nneka Onyeali-Ikpe, only a clean sweep of the vestiges of the old order is apposite. Said to be a close ally of the erstwhile MD/CEO, Mr Nnamdi Okonkwo, until she assumed office, the new occupant is said to have fallen out with her former boss over the battle for succession to the exalted office.

Rulers’ World reliably learnt that members of the bank’s Board of Directors are divided down the middle even as some were said to have approved the move to carry out a forensic audit into several activities of Mr Okonkwo, as the head of the bank.

Sources within the bank disclosed that Onyeali-Ikpe, who resumed as the bank MD/CEO in January 2021, felt compelled to investigate her predecessor’s activities following a plethora of information at her disposal upon resumption.

Although, it could not be ascertained at press time the possible reason for the thaw in the relationship between Onyeali-Ikpe and Okonkwo, informed sources however are of the view that it may be as a result of the fact that the former MD did not only supported another candidate for the position, he went about dissuading other Board members from supporting her candidature. The Board, as it turned out, didn’t see issues the same way he did

Immediately on the assumption of office on 1st January 2021, Onyeali-Ikpe, reportedly launched an investigation to verify there were no abnormalities in the system. This was interpreted as a move not only to solidify her position at the helms of affair of the bank but to also show she was not going to be a pushover of any sort,

To demonstrate that she was now fully in charge, Onyeali-Ikpe reportedly ordered all consultants hired by the bank during the tenure of Okonkwo to be investigated, and this reportedly led to most of the bank’s top executives, believed to be Okonkwo’s loyalists, promptly turning in their resignation letters.

Though it could not be ascertained the immediate reasons for the mass resignation, there were insinuations that Onyeali-Ikpe is bent on showing those she perceives or suspects to have been loyalists of the former MD/CEO; those she felt could undermine her or probably be spies of the former office holder, the exit door.

“So the supposedly smart ones who expected that they could be touched negatively by the ongoing war or purge quickly began to do the needful by resigning before they are unceremoniously asked to go,” a source said.

Rulers’ World further scooped that Okonkwo has been dazed by Onyeali-Ikpe’s audacious moves, even as he was said to have been lobbying other Board members to prevail on his successor to soft-pedal on the probe. He has his reasons.

It will be recalled that the Economic and Financial Crimes Commission (EFCC) had in September 2020 arrested the erstwhile bank chief and some staffers of the bank for allegedly receiving $115 million from, Diezani Alison-Madueke, the former Minister of Petroleum Resources, during the run-up to the 2015 presidential election.

The bank officials were arrested, charged to court, and later granted bail.

Reports have it that in the build-up to the 2015 presidential election, Diezani invited Okonkwo to help her handle some cash, which would be disbursed to electoral officials and groups.

The fraud was however exposed when the EFCC started investigations into how officials of the Independent National Electoral Commission (INEC) in Rivers, Delta and Akwa Ibom states received N675.1m.

It was alleged that the first company, Auctus Integrated, deposited $17,884,000 into the bank. The second company, Northern Belt Gas Company, deposited $60m while another company, Midwestern Oil and Gas, deposited $9.5m. A fourth company, Leno Laitan Adesanya, deposited $1.85m while the MD himself received $26m in cash.

Diezani’s son, Ugonna Madueke, was said to have later served as a middleman between the former Minister and the MD of the bank.

But for fear of becoming embroiled in yet another round of messy controversy, Okonkwo has been said to be unhappy with the latest development at the bank. He was said not to be folding his arms and allow his name mentioned in another unpleasant controversy, which might emanate from the internal probe ordered by the bank’s new MD.