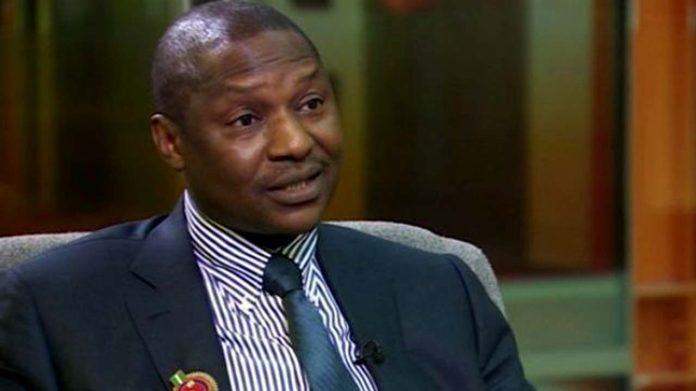 The Federal Government has urged legal practitioners to make Nigeria hub of arbitration, to attract dispute resolutions among countries.

The Attorney General of the Federation and Minister of Justice, Abubakar Malami (SAN) stated this today in a keynote address delivered at the 2022 Annual Conference of the Nigerian Institute of Chartered Arbitrators (NICArb) held at the Eko Hotels and Suites, Lagos.

Themed: “The Future of Arbitration and ADR in Africa: Developments and Sustainability,” he said this will not only promote arbitration practice in Nigeria but also enhance tourism and create a notable surge in foreign direct investment which would in turn boost the nation’s economy.

To achieve the objective of making the country to become an international arbitration centre, Malami promised that government on its part would ensure the growth of arbitration by encouraging autonomy of arbitration organization.

The Minister who was represented by a director in his ministry, Larry Nwudu, however stressed the need for a legal framework that meets international best practices.

To attain this, he said there is need to ensure the continuous training and re-training of judges, lawyers and arbitration practitioners in order to enhance effective dispute resolution and administration of justice.

Similarly, he stressed the inclusion of arbitration and other forms of dispute resolution in schools curricular especially at the tertiary level and establishment of more arbitration institutions.

Justice of the Supreme Court of Nigeria, Justice Chima Nweze, in a keynote address titled, “Arbitration, Justice and the Rule of Law” remarked that a number of factors are working together to elevate arbitrators to a quasi-judicial status.

He said that arbitrators, like Judges, have a duty to act judicially, and that this duty is not merely owed to the parties, but also owed to the public.

Justice Nweze urged members of the institute to always uphold the vital standards of independence and competence throughout the country and give effect to contractual rights in accordance with substantive and procedural legal principles, thereby helping to ensure the rule of law and effective delivery of justice.

He remarked that it is safe to conclude that Africa has achieved reasonable strides towards becoming an investment-friendly and resolution environment with the available arbitration laws and institutions in Africa.

He said what remains is for the sincere application of these laws within the institutional framework to promote greater efficiency.

“The role of the national courts and their disposition to support, rather than interfere in the application of other dispute resolution mechanisms, will go a long way in promoting Africa as a destination for investment”, he further stated.

The President and Chairman of council, NICArb, Prof. Fabian Ajogwu, in his remarks contended that there is a future for arbitration and ADR in Africa.
Prof Ajogwu said it was commendable that Nigerian government has heeded the call by arbitration and ADR practitioners and the need to update arbitration laws.