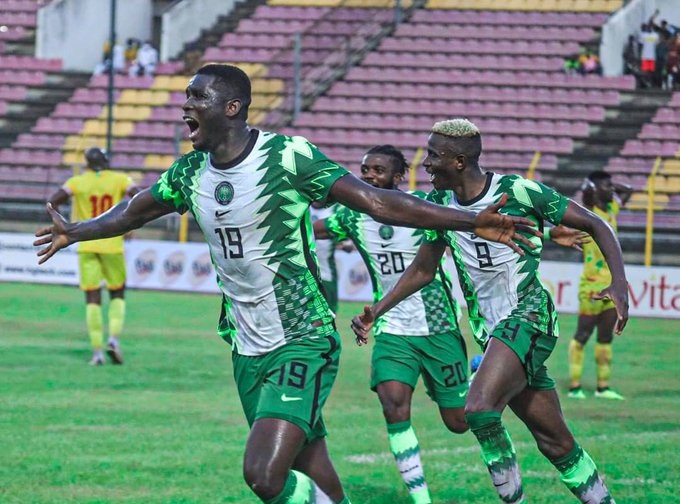 It was a very comfortable evening’s work for the Super Eagles who ended their qualifying campaign for the Africa Cup of Nations with a 3-0 triumph over Group L’s bottom side, Lethoso.

A goal from Man of the Match, and constant danger, Victor Osimhen in the first half, was added to by Oghenekaro Etebo and Paul Onuachu in the second to take Nigeria onto 14 points from their six games.

Gernot Rohr was delighted to be able to have Everton dangerman Alex Iwobi in from the start – he had been a doubt until a late negative covid-19 test came through – and along with Iheanacho and their Napoli striker caused their visitors all sorts of problems. In fact, the only surprise was that it took 23 minutes for one of them to bag the opener.

The whole team played their part – even Uzoho needed to have his wits about him on a few occasions – but a special mention to both Wilfred Ndidi and OghenekaroEtebo who held together the midfield brilliantly and kept things ticking along.

The last time the Super Eagles tackled the Crocodiles was in the reverse fixture of the 2022 Africa Cup of Nations qualification on November 17, 2019 in Maseru.

Lesotho have failed to win any of their last 17 away games in the Africa Cup of Nations qualification dated back to 2006. In those encounters, the Crocodiles managed just four draws with the remaining 13 ending in defeats.

Their last outing away home ended in a 1-0 defeat at Benin Republic in November 2020 – with Jodel Dossou’s first-half goal settling the fixture in Porto-Novo.

We may have to wait until January 2022 to see how the AFCON finals unfold, but fans of the Super Eagles will be expecting an excellent showing from their heroes.