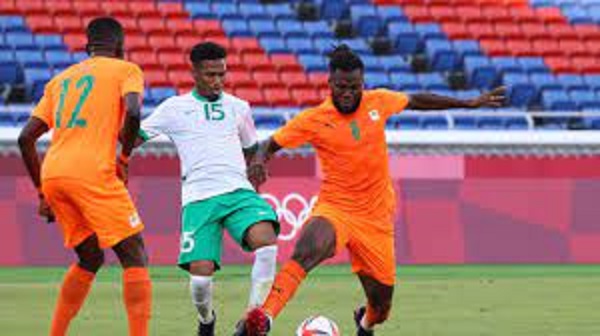 Ivory Coast got off to a winning start at the Tokyo Olympics men football with a 2-1 win over Saudi Arabia at the Yokohama International Stadium.

The Ivorians took the lead in 39th minutes with an own goal from Saudis Al Amri.

However, five minutes late, the Saudi’s levelled up with a strike from Al Dawasari before halftime.

The second half kicked off with so many expectations from both sides, but it took until 66′ minutes before AC Milan’s Kessie scored the second goal for Ivory Coast.

It was a superb finish that saw him pick the ball on the edge of the box, turned, and fired into the bottom corner emphatically to give his side the lead against Saudi Arabia.

The game was almost coming to an end before Ivorian’s Aboubacar Doumbia picked a straight red in injury time to reduce the squad to 10 men.

Earlier, Egypt and Spain shared points in a 0-0 draw in their early kick-off.